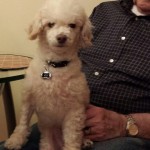 Eli, a 7 year old toy poodle, was found wandering close to heavy traffic on a main road in the Troy, Missouri. Only 8 pounds, Eli was not going to survive if he was hit by a car.

Suffering with Sarcoptic Manage, Eli was whimpering and crying when the Good Samaritan brought him to Pets A-Lone Sanctuary. Bare patches of irritated skin on his face, front and back legs and abdomen indicated that the mites had been eating, mating and burrowing on Eli for quite some time. He shied away from the human companionship and laps that he was bred to love as any human touching caused his body responded in pain.

Eli was immediately taken to the veterinarian for evaluation. It was not surprising, based on his size and condition that the evaluation revealed that that he was not only suffering from mange but also from dehydration and malnutrition. All treatable and preventable medical conditions!

His mange was treated and he was also micro chipped, neutered, and started preventative treatments for fleas and heartworm; standard for every animal that enters PALS.

Within several weeks, Eli’s mange was gone and in the place of irritated patches of skin was a beautiful apricot colored coat. With the return of his hair came the intelligent, highly responsive, playful, loving dog that likes to sit on his human’s lap and craves human attention. The volunteers were amazed at his calm temperament and laughed when he nuzzled their hands as a sign that he was ready to be petted and loved.

Eli was taken to an adoption event and found new parents who are determined to not let him suffer as he had again! He is currently enjoying a home where he is kept clean, fed and petted regularly. 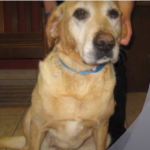 Dora was brought to the shelter by a police officer who received a call from a resident stating that a dog had been on their porch all night, during a rain storm – and it wasn’t theirs. Cold, wet, but wagging her tail, PALS’ volunteers quickly set out to give her a warm, dry place to lay her head.

During her veterinarian exam, it was found that this 7 year old Labrador retriever needed to have Tibial-Plateau-Leveling Osteotomy (TPLO) surgery on her right knee to stabilize the stifle joint after the cranial cruciate ligament (ACL in humans) had ruptured. She also tested positive for heartworms and had a fatty tumor that needed to be removed. Dora needed $2,050.00 in immediate medical care.

This was just the beginning for Dora. After surgery, the volunteers with the guidance of the veterinarian began a rehabilitation program with her to ensure that she stayed mobile. After 5 months of around the clock care and exercise, Dora was out sniffing the world and finding her own adventures to follow.

This exceptional dog has been cared for and loved every step of the way by the volunteers at PALS and Dora is grateful that they introduced her to her new best friend, a teddy bear, which has become her faithful friend and companion.

Dora is now exploring a new life with her Forever Home, an older couple that knows what aches and pains are and walks at her pace. No longer is she worried about having to find a place to go in the rain – her Forever Home has made sure that she is sheltered and loved. Although her total cost of care exceeded $3,200, the fee to adopt her was only $150.

From the Brink of Death – Abby the German Shepard Mix 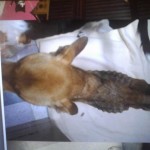 Lincoln County Animal Hospital said this was the worst case of starvation they had even seen.
Abby, a 2 year-old German Shepherd mix, was abandoned in a house where the owners had moved out and locked her in to starve to death. When the Good Samaritans brought her to PALS, the volunteers were closing their doors for the evening. On this rainy Saturday night in May 2013, the volunteers knew that they could not turn their backs on this animal that was looking at them in a daze. Abby was so weak, she could not stand or raise her fawn colored head to acknowledge that she had been rescued.

Her sunken eyes indicated that Abby had been without food and water so long that she was shutting down. Her skin hung off of her body from her shoulders blades to her protruding hip bones. Abby’s skin and fur, although clean, was black as the body was preparing for death. With no muscle left on her leg bones, she was unable to sit or stand for long.

Abby had arrived with just enough energy to enter her final sleep.

Working quickly, the volunteers began giving her food and water around the clock. Special attention was given to her to ensure that she had many small meals and water until her body was able to process food again.

Abby was taken to the veterinarian where she was given a thorough examination. She was found not only to be in starvation mode but also tested positive for whipworms and roundworms which added to her body’s dehydration. Medicine was given to rid her body of the parasites and now food, water and rehabilitation became important part of her road to recovery. Within 20 days of her rescue, she was also micro chipped, spayed, and given her annual shots.
It took eight weeks before the signs of health started to show in Abby. Although she was still severely underweight for her breed, she was walking and slowing showing signs of a dog who wanted to play.

Her success is in her survival. Survival as death was within hours.

Pals has been actively seeking a Forever Home for the holidays. Abby is the sweetest girl around. A lover of people & life she is fully recovered and healthy. Abby is very friendly, affectionate, quiet & gentle – but very bossy with other dogs & cats. Her goal is to be the only beloved pet in the home!